Checking out Big Mal, went into panic as couldn't find the 10m anderson lead anywhere then recalled somebody had used it for the power cable in the back of Jeep, the spare bit I had was 200mm short so the extension lead got the chop...
Went to my Ebay shop for that stuff https://www.ebay.com.au/itm/10m-METER-8mm-8-B-S-TWIN-CORE-DOUBLE-INSULATED-CABLE-COPPER-12V-WIRE-DC-DC/291767118030?ssPageName=STRK:MEBIDX:IT&_trksid=p2060353.m1438.l2649
ordered on Monday arvo, from Melbourne and it gets here, 1800Km on Wed morning, I'm astounded.

So added an Anderson to each end and its now ready for an extension to portable solar, compressor or anything else with an Anderson plug, found carrying a 5m and a 10m covers all eventualities...........time to order a new soldering iron, finished the job with my small blow torch.......it never ends......

My Anderson plug tale. I recently purchased a new compressor from Kings, a nice 2 cylinder Thumper Max and promptly tried it out on my tyres. It came with alligator clips only so I connected it across my starting battery and it went like the clappers. 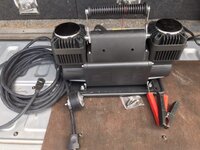 A bit later I fitted Anderson plugs on the power cable so I could use it directly from my second battery and, as it was a simple connection I did not test it right away. 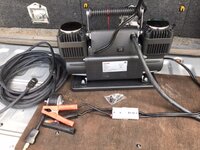 The first test came when our daughter wanted an air bed pumped up so quickly set it up and started it. It burped a couple of times and stopped so I connected it to my fridge plug and started the car. Same thing, a couple of burps and nothing.
I then connected my ampmeter between the Anderson plugs and put it straight across the main battery again. It ran fine but it pulled 60 amps. I then had a closer look at the plate on the unit. 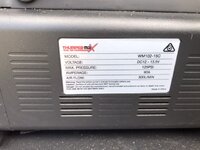 It tops out at 90 amps !! I had blown 4 fuses in the truck on both batteries, melting one of the holders in the process, so now the compressor has its dedicated Anderson plug with a 100 amp circuit breaker. 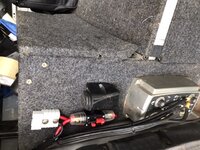 (Pic is on its side)

Note to self, read specs before using.

I have a thumper 2 cly too works great but just use straight from battery
Likes: chartrock

My compressor is a 2 cylinder job, have no idea brand nowadays but its a hungry bustard also, the cable used to get very hot, melted the built in fuse holder so I rewired with 8 B&S added a new switch and fuse holder, mounted it in a box with an anderson on the side, always run it with engine going and works well now but if doing tyres I shut it down between until needed........... I hate the noisy things and its in the recovery catergorie,neccessary evil gear.
Likes: KECL, Bluey and chartrock

I have the TJM one

mfexpanda said:
I have the TJM one
Click to expand...
Is it mounted in car looks good hows it go